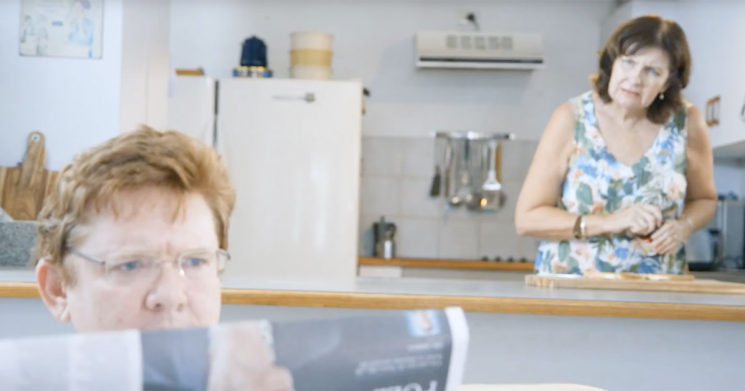 Prior to Mother’s Day this year we ran a short 15 second ad on the regional TV network Imparja. You can see the ad below if you wish.

The ad aired for 13 days and on the last day (May 13th) the Advertising Standards Bureau (ASB) received a complaint about our ad saying it depicted domestic violence.

Clarity is Queensland’s largest independent, family-owned audiologist. Clarity was built on a foundation of five ethical practice principles so to have received this complaint comes as a shock.

The ASB is an industry self-regulation body. It is not a Government or regulatory body. They are funded by the advertising industry and exists to ‘give voice to consumer values and guide industry in maintaining decent, honest advertising aligning with prevailing community values’.

To be accused of breaching community values, which goes against our very way of operating is distressing. The audiology industry in Australia is a self-regulated, highly competitive industry, where operators can take advantage of people’s medical disorders and profiteer. The recent ACCC and Senate enquiry has shown that these unscrupulous operators do exist vindicating our move, when established in 2008 to create and abide by our five ethical practice principles. To have the ASB uphold the complaint is distressing for our entire team as we value so much the trust the community has placed in us when others in the industry take advantage of that trust.

To have received this complaint was also very much a surprise. When scripting and workshopping it within our team, sharing the script and even the final product, not one person raised an issue thinking that this in any way showed domestic violence either as a depiction or as a suggestion.

But one of the consequences that’s not usually highlighted is the effect hearing loss can have on those around you.

The fact is that 1 in 6 Australians suffer from hearing disorders. That figure rises to 3 in 4 when we reach 70.[1] That is a lot of people affected by hearing loss, and importantly, the neglected group, partners and family.

People in denial of a hearing loss often create conflicts with their significant others. Significant others are most often spouses, but may also include siblings, children, other family members, and friends. A couple in crisis due to a hearing impairment experiences frustration and anxiety that lead to behaviour and coping strategies that are maladaptive.[3]

The same report also found:
“The significant other may feel anger and frustration at the partner’s unwillingness to accept responsibility for the consequences of the impairment. Frequent arguments may result when the person who denies a hearing impairment fails to recognize the partner’s efforts to adjust to the communication problems. Married couples frequently report years of quarreling resulting from communication problems at home. The spouse may complain about the level of loudness of the television or radio, lack of participation in social activities, the hearing-impaired person’s telephone habits and loud speaking voice, and other communication problems that arise from years of an untreated hearing impairment. The significant other shares in the handicap of the denier by experiencing a reduced quality of life, embarrassment in public, and social withdrawal.”

The National Council on the Aging in the USA (Seniors Research Group, 1999) organised a study in which 2304 elderly hearing-impaired persons, hearing aid users as well as non-users, answered a questionnaire. In addition, 2090 significant others of hearing-impaired people answered another questionnaire. The results showed that hearing-impaired people who did not use hearing aids more often stated that they felt sad or depressed, were worried, showed paranoid tendencies, took part in less social activity, and experienced more emotional turmoil. Both the affected people and their significant others reported benefits from hearing aid use in terms of better relationships at home, more confidence, and better relationships with others. Family members reported such benefits more often than the hearing-impaired people themselves. The most common reasons for not using hearing aids in this group were that they felt that their hearing was not bad enough or that they got along without one.

The lead-up to Mother’s Day was an opportune moment to highlight the effect untreated hearing loss has on family members and the frustration it can cause. We developed this script to use the opportunity to underline what significant others really want from their partner-to action their hearing loss. It was a quick and, we thought appropriately light-hearted, sketch that we felt portrayed this consequence of hearing loss.

We do take this complaint very seriously. Domestic violence is a big issue in Australia and we certainly did not intend in any way to diminish the issue or take advantage of it. Some commentators have stated that we did it to get attention or to be renegade. We hope anyone who has seen the ad can tell that was not the intent. Depicting the frustration felt by the loved ones of people with hearing loss is difficult but important in allowing all parties to understand that hearing loss not only affects the person with the loss but also the people around them

The ASB decided that in this instance the way we attempted to show that frustration wasn’t justified and we absolutely abide by their decision.

The ad was shown exclusively on Imparja (including affiliate stations Gem and Go) from 1-13 May with 51 paid and 150 bonus 15 second spots. Imparja reaches a potential audience of over 1,000,000 viewers throughout the Northern Territory, Queensland, New South Wales, South Australia, Victoria and Tasmania which we had the potential to reach multiple times as per our scheduling. Out of that potential audience we received one complaint.

We also ran this ad in a boosted post on Facebook, a medium notorious for instant, harsh and vitriolic criticism. The ad reached 12,748 people on Facebook. 610 of these people clicked through to our educational landing page ‘Warning Signs of Hearing Loss‘. We had 18 shares and 8 comments. We received no complaints either as a comment, direct message or other channel from anyone who saw the ad on Facebook.

While “surprised” would have been a better word than “incredulous” to include in our response to the ASB, we were surprised when someone took offence to this ad based on what we went through in-house and with family and friends in developing it. But surprise is no excuse and we do take the complaint very seriously. As we have already stated. domestic violence has no place in Australia and if even one person out of the hundreds of thousands exposed to this ad took offence to it, we are not doing the right thing. The ad ceased airing as scheduled on the day of the complaint and we will not schedule it to air again.

POSTSCRIPT: The ASB decision has now been reported by outlets like Mumbrella and Mammamia, mostly castigating the ad. We understand these responses recognising the ASB’s strong stance on anything that could even purport to represent or depict domestic violence. Some support has also come from other international quarters though, commending us for raising the issue covered in depth in our response to the ASB and above – the impact of untreated hearing loss on significant others. A company in the UK has discussed the ad and commended it for raising this issue that is rarely covered.

[1] Listen Hear! The Economic Impact and Cost of Hearing Loss in Australia. A report by Access Economics Pty Ltd February 2006

“After feeling so overwhelmed by the information and pricing of another provider I was nearly ready to give up. But after my daughter found Clarity I was confident after Esther's [Clarity Audiologist] first visit. She made me feel that I could ask any questions and she understood that I had a budget that I needed to stick to. She has shown me how to work my hearing aids and the follow up has been wonderful. Thank you.”